In the last decade, the software industry has built many open source tools for machine learning to solve the pain points:

Pain #1 Complex workflow/steps from raw data to model, different tools needed by different steps, hard to make changes to workflow, and not error-proof​

It is a complex workflow from raw data to usable models, after talking to many different data scientists, we have learned that a typical procedure to train a new model and push to production can take months to 1-2 years.

It is also a wide skill set required by this workflow. For example, data transformation needs tools like Spark/Hive for large scale and tools like Pandas for a small scale. And model training needs to be switched between XGBoost, Tensorflow, Keras, PyTorch. Building a data pipeline requires Apache Airflow or Oozie.

Yes, there are great, standardized open-source tools built for many of such purposes. But how about changes need to be made for a particular part of the data pipeline? How about adding a few columns to the training data for experiments? How about training models, and push models to validation, A/B testing before rolling to production? All these steps need jumping between different tools, UIs, and very hard to make changes, and it is not error-proof during these procedures.

For example, there're many machine learning platform built on top of K8s. It is relatively easy to get a K8s from a cloud vendor, easy to orchestrate machine learning required services/daemons run on K8s. However, K8s doesn't offer good support jobs like Spark/Flink/Hive. So if your company has Spark/Flink/Hive running on YARN, there're gaps and a significant amount of work to move required jobs from YARN to K8s. Maintaining a separate K8s cluster is also overhead to Hadoop-based data infrastructure.

Similarly, if your company's data pipelines are mostly built on top of cloud resources and SaaS offerings, asking you to install a separate YARN cluster to run a new machine learning platform doesn't make a lot of sense.

In addition to the above pain, we do see Data Scientists are forced to learn underlying platform knowledge to be able to build a real-world machine learning workflow.

For most of the data scientists we talked with, they're experts of ML algorithms/libraries, feature engineering, etc. They're also most familiar with Python, R, and some of them understand Spark, Hive, etc.

If they're asked to do interactions with lower-level components like fine-tuning a Spark job's performance; or troubleshooting job failed to launch because of resource constraints; or write a K8s/YARN job spec and mount volumes, set networks properly. They will scratch their heads and typically cannot perform these operations efficiently.

After the data is prepared, the data scientist needs to do several routine tasks to build the ML pipeline. To get a sense of the existing the data set, it usually needs a split of the data set, the statistics of data set. These tasks have a common duplicate part of code, which reduces the efficiency of data scientists.

An abstraction layer/framework to help the developer to boost ML pipeline development could be valuable. It's better than the developer only needs to fill callback function to focus on their key logic.

It was part of YARN initially, and code resides under hadoop-yarn-applications. Later, the community decided to convert it to be a subproject within Hadoop (Sibling project of YARN, HDFS, etc.) because we want to support other resource management platforms like K8s. And finally, we're reconsidering Submarine's charter, and the Hadoop community voted that it is the time to moved Submarine to a separate Apache TLP.

Submarine is the ONE PLATFORM to allow Data Scientists to create end-to-end machine learning workflow. ONE PLATFORM means it supports Data Scientists and data engineers to finish their jobs on the same platform without frequently switching their toolsets. From dataset exploring data pipeline creation, model training, and tuning, and push model to production. All these steps can be completed within the ONE PLATFORM.

It is also designed to be resource management independent, no matter if you have Apache Hadoop YARN, K8s, or just a container service, you will be able to run Submarine on top it.

1) Users should be able to create, edit, delete a notebook. (P0) 2) Notebooks can be persisted to storage and can be recovered if failure happens. (P0) 3) Users can trace back to history versions of a notebook. (P1) 4) Notebooks can be shared with different users. (P1) 5) Users can define a list of parameters of a notebook (looks like parameters of the notebook's main function) to allow executing a notebook like a job. (P1) 6) Different users can collaborate on the same notebook at the same time. (P2)

A running notebook instance is called notebook session (or session for short).

Experiments of Submarine is an offline task. It could be a shell command, a Python command, a Spark job, a SQL query, or even a workflow.

The primary purposes of experiments under Submarine's context is to do training tasks, offline scoring, etc. However, experiment can be generalized to do other tasks as well. 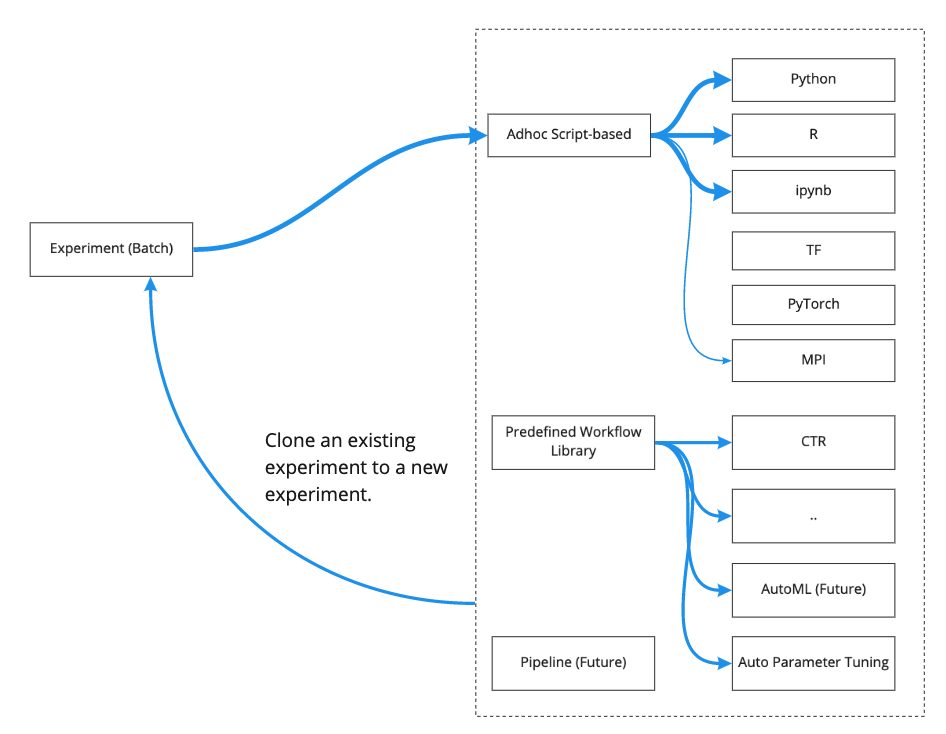 There're two types of experiments: Adhoc experiments: which includes a Python/R/notebook, or even an adhoc Tensorflow/PyTorch task, etc.

Predefined experiment library: This is specialized experiments, which including developed libraries such as CTR, BERT, etc. Users are only required to specify a few parameters such as input, output, hyper parameters, etc. Instead of worrying about where's training script/dependencies located.

Pipeline is a special kind of experiment:

Environment profiles (or environment for short) defines a set of libraries and when Docker is being used, a Docker image in order to run an experiment or a notebook.

Docker or VM image (such as AMI: Amazon Machine Images) defines the base layer of the environment.

On top of that, users can define a set of libraries (such as Python/R) to install.

After model saved, users can specify a serving script, a model and create a web service to serve the model.

We call the web service to "endpoint". Users can manage (add/stop) model serving endpoints via CLI/API/UI.

Metrics for training job and model​

This also include Submarine may need to take input parameters from customers and create/manage clusters if needed. It is also a common requirement to use hybrid of on-prem/on-cloud clusters.

For the data security / user credentials / other security, it will be delegated to 3rd libraries such as Apache Ranger, IAM roles, etc.

Assets belong to Submarine system will be handled by Submarine itself.

Here're operations which Submarine admin can do for users / teams which can be used to access Submarine's assets.

There's also need to tag dataset which will be used for training and shared across the platform by different users.

Like mentioned above, access to the actual data will be handled by 3rd party system like Apache Ranger / Hive Metastore which is out of the Submarine's scope.

Submarine SDK provides Java/Python/REST API to allow DS or other engineers to integrate into Submarine services. It also includes a mini-submarine component that launches Submarine components from a single Docker container (or a VM image).

Details of Submarine Server design can be found at submarine-server-design.